What do David Baumbach, deception, malice, no pay, criminal activity and quality renovations have in common?

David Baumbach has not settled his debt and still owes, so what does he do?
Changes the company name.
Has he ever done this tactic before in effort to make legal action more difficult?
You sure?
David (Dave) Baumbach may be suffering from spiritual and/or mental illness, so pray for this abusive, malicious man.
If you have him and/or Premier Kitchen & Bath work for you, will you be safe from being involved in, yet not limited to, his legal troubles, questionable workers he has and/or may use, his other troubles? Be sure and investigate this nasty man.
A cheat is a cheat, and a fraud is still a fraud! 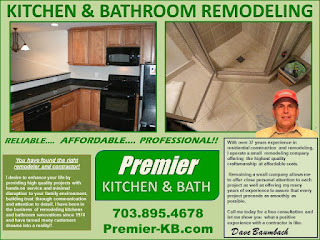 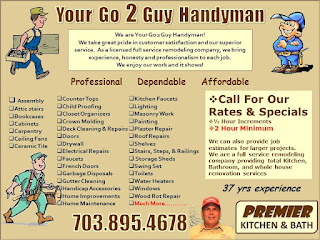 Dave Baumbach who at the time of abusing a struggling man, stated he owns and runs D-B Build Quality Renovations. Now it has been brought to my attention that David(Dave) Baumbach has changed the name of DB-Build Quality Renovations to Premier Kitchen & Bath otherwise known as Premier-KB.com. Did David (Dave) Baumbach change the name to make a lawsuit for not paying his dept(s) more difficult. Has he done this type of corrupt behavior in the past? You sure? ASK! He still has not paid for abusing me - who was and is struggling. Dave Baumbach intentionally and with malice makes life hard on people who will not be part of corruption. He is full of malice, so maybe you should think more times than not about using this man's services. He has been known to use people who are not legally allowed to work and/or involved in criminal activity. BEWARE!

I was contacted that David Baumbach may not of had a license to do the work he tricked me into doing. He was evasive and deceptive with being truthful. But, if David Baumbach has a habit of working people, then not paying, and changing his company name, then maybe you should think a few times over and check into this man before hiring him. Ask him to tell the truth about working a man who was struggling, not paying him and then making it all the worst for him. ASK! Is this the type of immoral, unethical and nastiness that you and/or your company seek to have around your children, in your home, business and/or with trusting to actually be righteous? You sure?

David Baumbach may be in part or whole suffering from some sort of spiritual and/or mental illness.

He advertises as being Reliable, Affordable and Professional. I experienced his lack of being reliable and professional, and the affordable one is interesting since he probably could be lower than competitors due to not paying what he owes people.

BEWARE of this corrupt contractor!

Gene (Gene) F. Muller, one of the parties listed with the auditors office as an owner, has been expressed to me a working in the IT field. He has been unrighteous and does not sort out my full pay for the work either. So, is this man working for you and is he with good spirit and/or intentions?

More info has come the way as to what Gene F. Muller and Heidi S. Hess do for a living. Can we say, IT and affiliation with craft/designing and/or authoring? Maybe? More coming on these two who do not know right from wrong either, and are friends with Baumbach.

He lives and runs his business from this house at 6516 Roosevelt St., Falls Church, Virginia 22043.

CHECK TO MAKE SURE HE STILL HAS A LICENSE. I was informed he does not, but you verify.
He is just plain nasty!

Go to http://corruptioncripples.blogspot.com/2012/07/dave-baumbach-deception-malice-criminal.html for more about this nasty man and his deception. This will be continually updated with any and all information including, yet not limited to, where he might be working and with whom.

Think about this; Will you be affected during a lawsuit by me to get what is owed and/or its outcome? The owners at the 403 N. Fayette St. residence are being pulled into legal action due to Dave Baumbach's nastiness. What about you? Better think about this one a great deal and ask a professional, because this is being drafted and whom ever and where ever he gains funds, with winning a hands down legal proceeding, I will pursue the collection legally of what is owed. OK? If your name and/or business gets into his web of malice and nastiness, then blame David (Dave) Baumbach now doing business as Premier-KB.com and/or Premier Kitchen & Bath. His other site which was listed as DB-Build.com has been parked according to GoDaddy.com

Not all contractors who present details on their website and/or in person are as they actually appear. Such became the case of David Baumbach who still owes me a load of pay for fine work that was done. He became angry for not being as him with staying silent about 2 of his workers who are at the very least, dodgy. One of them, a man who claimed to be from Honduras and in need of a lot of money to pay legal fees was caught red handed when a professional type scalpel fell from his tool belt. This exposure had him become enraged and showed that this man might well be some sort of gang member. David Baumbach owner of DB-Build.com & David Baumbach Quality Renovations tried to play it down and did not show interest in this unusual item that this man had no business carrying unless to do harm.

Here is a link to the BBB which shows at least 2 recent complaints with David Baumbach Quality Renovations dba DB-Build.com:
http://www.bbb.org/washington-dc-eastern-pa/Business-Reviews/contractors-general/david-baumbach-general-contracting-in-falls-church-va-194501030/complaints

Here are some received responses about D-B Build.com and/or David Baumbach:
gofromthere stated; That asshole ripped me off also,where is he working now,so can smack shit out off his piece off shit ass

Bruce stated; David Baumbach had his contractors license revoked in March of this year. If he is still contracting, he is probably doing it illegally.

turbotransportdelivery stated; Hey- this guy told me one sunday night to show up at work the next morning. Never even talked to me once before that time. That was a red flag. I hope u learned a valuable lesson

To date, Dave Baumbach of David Baumbach Quality Renovations has yet to pay what he owes. The owners of the property and its address where the scalpel fell from the Honduras man are as follows:
Eugene ( Gene ) F. Muller and/or Heidi S. Hess 403 North Fayette Street  Alexandria, VA 22314

A video of the work still owed for will be coming soon. So check back to know more of the malice of this man and the hardship he intentionally brings forth.