This rollback wrecker is not for duck hunting!

There is a lot of chatter about the U.S.A.'s coming collapse. I was not looking for this, but it was right there along the road near to 7957-7959 Fullerton Rd., Springfield, Virginia 22153. Upon inspection, the armored rollback wrecker was not painted to be used for anything except during civilian situations. Although able to withstand small arms attacks, it was not too obtrusive in appearance as some vehicles used as such.

Actually, all about were all sorts of makes and models of armored vehicles. It was almost like watching a "special people" parade, except the vehicles were not moving and they were without the "special people".

Here is a link to the website of the firm, Lenco, maker of this fine ride:
http://armoredtrucks.com

Lock and load Dano', they are getting ready for ya'
(video coming soon!) 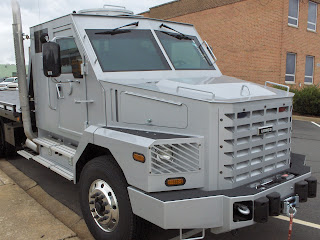