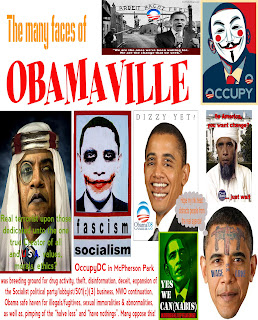 Read some details of just another face of the person squatting in the "We the People" house:

The Obama you don't know

Few if any of his predecessors took the oath of office with higher public hopes for his success than President Obama on Jan. 20, 2009.
Millions of Americans hailed his election as an end to partisanship, a renewal of the spirit of compromise and a reinvigoration of the nation's highest ideals at home and abroad.

Above all, as America's first black chief executive, Obama symbolized the healing of long-festering wounds that were the terrible national legacy of slavery, the Reconstruction Era and Jim Crow. We would be, finally, one nation.

But after nearly four years in office, Obama has become a sharply polarizing figure.

His admirers believe he deserves a special place alongside Wilson, the Roosevelts and LBJ as one of the architects of benevolent government.

His critics believe he is trying to remake America in the image of Europe's social democracies, replacing America's ethos of independence and individual enterprise with a welfare state inflamed by class divisions.

In an effort to get a clearer picture of Obama -- his shaping influences, his core beliefs, his political ambitions and his accomplishments -- The Washington Examiner conducted a four-month inquiry, interviewing dozens of his supporters and detractors in Chicago and elsewhere, and studying countless court transcripts, government reports and other official documents.
Over the years and in two autobiographies, Obama has presented himself to the world as many things, including radical community organizer, idealistic civil rights lawyer, dynamic reformer in the Illinois and U.S. senates, and, finally, the cool presidential voice of postpartisan hope and change.

With his air of reasonableness and moderation, he has projected a remarkably likable persona. Even in the midst of a historically dirty campaign for re-election, his likability numbers remain impressive, as seen in a recent AP-GFK Poll that found 53 percent of adults have a favorable view of him.

But beyond the spin and the polls, a starkly different picture emerges. It is a portrait of a man quite unlike his image, not a visionary reformer but rather a classic Chicago machine pol who thrives on rewarding himself and his friends with the spoils of public office, and who uses his position to punish his enemies.

Peter Schweizer captures this other Obama with a bracing statistic in his book "Throw Them All Out," published last year. In the Obama economic stimulus program's Department of Energy loans, companies owned and run by Obama contributors and friends, like Solyndra's George Kaiser, received $16.4 billion. Those not linked to the president got only $4.1 billion. The Energy Department is far from the only federal program in which favoritism has heavily influenced federal grants.

To paraphrase Tammany Hall's George Washington Plunkitt, Obama has seen his opportunities and taken them, over and over.
- Mark Tapscott / Executive Editor

(To read more of the articles accompanying this, click here)