Guns, guns, guns: Give them up so you can eat - for now - Deception - Corruption Cripples

Below are some articles which show those who use timing and occurrences happening about them to only better their position in society.

The parent company as it turns out is none other than The Kroger Company. For those of you not familiar with The Kroger company, then sit back and come to know.
The Kroger company has been around since 1883, when Barney Kroger invested his life savings of $372 to open a grocery store at 66 Pearl Street in downtown Cincinnati.

OOPS! Have to stop there since I will be going out to shovel walks for a living. It showed!

Check back later today for the conclusion of this, and what The Kroger company and Big Brother started at Kroger stores in Ohio near Wright Patterson Air Force base.
It has a lot to do with the stories about taking your guns!

Big Brother in the Food business!
Keep the Fear,
for you, the masters can steer.
Not!
Conspiracy theorist are going love this one, except it is not a conspiracy, just truth. 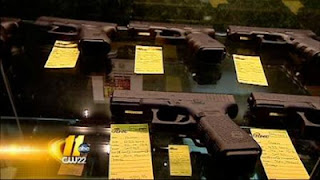 LOS ANGELES -- Los Angeles police are offering grocery store gift cards for guns in a buyback program that was moved up in the wake of the Connecticut school shooting.

The anonymous buyback program means weapons can be turned in with no questions asked. Handguns, rifles and shotguns can be exchanged for $100 Ralphs grocery store gift cards. Assault weapons earn a $200 card.

The program, designed to get guns off the streets, usually is held in May. Mayor Antonio Villaraigosa decided to do it now in the wake of the Dec. 14 shooting rampage in Newtown, Conn.


(Reuters) - Police traded gift cards for guns in Los Angeles on Wednesday, in a buyback program Mayor Antonio Villaraigosa announced as a crime-fighting response to the deadly shooting rampage in Newtown, Connecticut.

Police officers handed out $200 grocery store gift cards to people who turned in an automatic weapon, and $100 gift cards to those who provided a handgun, rifle or shotgun.

Los Angeles has held an annual gun buyback since 2009, and similar events have been organized in years past in several other cities, including Detroit and Boston. Police in San Diego had a buyback earlier this month.

Some experts say the buybacks have little effect in reducing gun violence, but Villaraigosa touted the buyback program as one step that can be taken in response to the Sandy Hook Elementary School shooting in Newtown, Connecticut, on December 14 that claimed the lives of 20 children and six adult staff members.

The shooter, Adam Lanza, killed himself and also shot to death his mother at the home he shared with her, police said.

Los Angeles normally has its gun buyback in May, but Villaraigosa announced last week that the city would have this special buyback in response to the Newtown tragedy.

"There are a number of things we can do. This is just one of them," Villaraigosa said on CNN. "We've got to also address the culture of violence that we've got in this country."

At last count, the Los Angeles gun buyback had collected 1,366 firearms, including 477 handguns and 49 assault weapons, said Vicki Curry, a spokeswoman for the mayor.

The buyback ended at 4 p.m. local time, but a final tally of guns collected was not expected to be released before Thursday. In May, the city's annual gun buyback program collected 1,673 firearms at six locations, compared to two locations used for the program on Wednesday, Curry said.

At each of the locations where the buyback was held, a line of cars stretched around the block, Curry said. People dropping off their guns were asked to leave them in the trunks of their cars, where officers retrieved the weapons. Those surrendering their guns were allowed to remain anonymous.
While officials in Los Angeles and elsewhere have said the gun buybacks help keep streets safe, a 2004 report by the National Research Council of the National Academies questioned that conclusion.

Among the report's findings were that guns surrendered in buybacks tend to be old or inherited from previous owners, and not likely to be used in crime. Also, gun owners find it easy to replace their firearms, according to the report, which was titled "Firearms and Violence: A Critical Review."

& an earlier article via

(Reuters) - Many gun owners fear a ban on assault weapons like one used in the Connecticut elementary school massacre would be the first step to taking away their guns, even though the second amendment of the U.S. Constitution protects the right to bear arms.


Since a shooting rampage last Friday left 26 people dead at a school in Newtown, Connecticut using a type of assault rifle called an AR-15, a growing number of politicians have called for a ban on assault weapons.

"I wept like a baby when I saw what was happening in Connecticut," recalls Claude Diehl, 50, a self-employed structural designer in Savannah, Georgia, who has two daughters of his own. Diehl owns a number of weapons, including an AR-15 and several Glock 9mm pistols with high-capacity ammunition clips that gun control advocates want to see banned.

"If we start with an assault weapon ban, where does it end?"

Interviews conducted with gun owners in 10 states on Wednesday elicited a similar response when they were asked about assault weapon ban legislation supported by Democratic President Barack Obama.

"I honestly think a total ban (on guns) is coming," said Ryan Jones, 31, who works in security in the Detroit area and who proudly boasts he killed his deer for this season recently with a pistol at 35 yards.

"But if they ever try to take away what founded this country they'll have a major problem."

"For a start, They'd turn me into a criminal because legal or not I'd still carry a gun to protect my family."

Gun owners said that in the wake of the massacre, the focus should be on better access to mental health for people such as suspected Connecticut shooter Adam Lanza, or finding ways to prevent guns from ending up in the hands of the mentally ill.

INDIVIDUALS, NOT FIREARMS SEEN AS ISSUE

Lanza was apparently seen as troubled before last week's rampage, though not as a risk to others. The weapons he used belonged to his mother, who was also his first victim.

"A lot of this comes down to state of mind," said Jose Rodriguez, 47, a gun safety trainer based in the Chicago area. "If someone wants to commit a crime like that, they will find a way to do it."

"The type of gun is not the issue here, the issue is the individual."

Other gun owners argued that as America is already awash with so many firearms, including assault rifles, any ban would have little impact. The Small Arms Survey, a research project at the Graduate Institute of International and Development Studies in Geneva, estimated in 2007 that American civilians owned around 270 million firearms - more than six times either China or India, which both have far larger populations.

"If someone is planning to break the law, I don't see how a ban will stop them getting firearms," said Randy Keller, who is training to be a nurse in Bowling Green, Kentucky, and who owns assault rifles. "Nothing that's being proposed would have prevented the tragedy in Connecticut last week."

JB Williams, a conservative activist in Nashville, said he received between 600 and 800 emails a day this week from people concerned their gun rights were threatened by the "far left."

"In many cases gun owners are people concerned with individual rights," he said. "They see this push to ban assault weapons as part of a broad attack on many fronts on their individual rights by people who do not value what is part of the DNA of this country."

Gun enthusiasts such as Claude Diehl said the problem America faces is much broader and cuts much deeper than gun ownership and is a "cultural issue of the heart."

"President Obama spoke at the weekend about protecting children," he said. "But how are we protecting our children when we kill 3,500 babies a day in America through abortion?"

"If they banned abortion I'd give them all of my guns, every last one of them. But instead of focusing on the bigger issues, it's easier to go after guns."


Residents of New Jersey's most impoverished and murder-prone city turned in a record number of weapons in a recent gun buyback program, and officials on Tuesday surmised that the Connecticut school shooting could have something to do with that.


Any instrument and/or object of choice to do harm is not the problem,
so: