Here are some pics of what took place beginning on or about noon today, January the 27th 2012, in McPherson Square (Park), Washington, D.C..
It became a sunny day, and as the notices were being applied, the wind grew fiercer. What do you think?


U.S. Park workers dressed in dark green garb with U.S. Park police escort started to tape and - when available - personally give out a notice dated January 27, 2012. It was printed on bright green letter sized paper. The colour represented that which is used in the OSHA colour scheme of optical awareness alert colours.

Does high noon today and the picking of beginning the crack-down on OccupyDC, as well as, those about Freedom Plaza on or about the 30th of January 2012 at “High Noon”, show the real face of the National Park Service (NPS)?
Or is it just a coincidence?

U.S. Park police were asked if the same treatment would be also addressed with Concepcion Picciotto of the White House 24 hour peace vigil, yet they declined to comment except to say to go and wake her up. For years U.S. Park police has stood over her camping, taking in money and sleeping under a closed structure. She does her camping right across from the White House on the south end of Lafayette Park.

If fairness and unbiased dealings exist within the U.S.A. “rule of law”, then why does Concepcion and the Propostion One Committee who have been affiliated with the vigil, get away with breaking the law and even gain profit from it?
WHY?
Is is just corrupt DC politics?
To set it straight, the White House 24 hour peace vigil is under the same guidelines as those being posted to those about McPherson Square and Freedom Plaza. Many get it incorrect with stating the vigil is grandfathered by law. Being part of the vigil and realizing by their abusive and even the terror I was forced to endure, I can state that those who state such are wrong. It is only grandfathered in law with being allowed to stay where it is, be under regulations as to the signs and etc. No CAMPING though! No going to the toilet under cover as Concepcion does routinely.

Who are the OccupyDC organizers/promoters that have been collecting loads of donations with “pimping” the “haves”, “have-less” and/or “have nothings”?
WHO ARE THEY?
Where have all the donations gone to? Whether it be goods or so forth?

We will be bringing to you some names and faces of those who may be responsible.
Demand they become transparent and forthcoming!

Also in time, exposing and revealing details of Concepcion Picciotto and those of Proposition One with their use of terror, abusive ways, theft, deceit to the public and even intentional misguiding of law enforcement officers. Yes, those so called “peace activist” who are really “piece activist” for getting for their agenda did do as such. Keep checking back for links and/or reporting to be listed here.

Pray for all those who use evil for profit/gain/control.

No more sleeping for OccupyDC?

On the 24th of January, 2012 the House Oversight and Government Reform Committee, chaired by Rep. Darrell Issa (R-CA), held a hearing regarding possible health and safety issues at the Occupy D.C. encampment.

Here are some links to news stories concerning this:
The Huffington Post

Occupy DC On No-Camping Enforcement: 'We Appreciate Them Working With Us'

If they push out those in McPherson Square (Park), then will the same treatment be given to Concepcion Picciotto who camps rights across from the White House and has for years? That vigil is under regulations not unlike those that the Occupiers face at McPherson Square (Park). If she is allowed to continue to sleep there, collect loads of money and use the toilet in a container while under her tent, then why can't they?

Here are some pics to look over and we will be bringing the behind the scenes of the White House vigil, prop1.org and Concepcion Picciotto. Her nastiness; her deceit; her theft; her frauds and more.

Is she in fact a dead beat parent?

Did she abandon a child?

What is up with the aluminum helmet she wears?

Why did and do those that know how nasty she is, hide it from view and/or stay silent for others to become her victim?

The circus and OccupyDC?

A man set up his 1 year old child's tent near the intersection of K street and 15th street in the evening of the 24th of January, 2012.

Is it to be taken as a connection between the current OccupyDC and a circus? The man said, "no".
He equipped it with lights, a mirror, picket fence corners and more.

Here he is engaged in a conversation with Pepper, an OccupyDC'er. 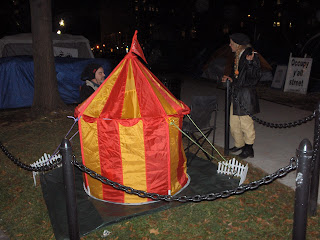 OccupyDC and their 1st snow amounting to anything.

Here is a video of pics from OccupyDC and the snow that came down upon them at McPherson Square (Park) from the 20th to the 21st of January, 2012.

Why are people being forced to live as such in the U.S.A.? WHY?

On or about the 11th of January 2012 in the later part of the AM hours, a man who had been staying about McPherson Park (Square) in DC for some time, apparently left a young child in a tent which was located nearest to K and 15th streets. Below are some photos from video of the incident. The video should be made available soon. His accused action involving a child is alarming, but also what took place with his property after he was arrested should also be a concern for those who OccupyDC say they represent – the 99%.
When those presenting themselves as righteous use tactics which their so called “enemies” use, then are they not the enemy?
Pray to not be so quick to arrest, convict and execute this man and/or others in similar situations as what some of OccupyDC have taken the position of doing.
We MUST think clearer and get to the actual Truth, not just our interjection of our emotions. Please!

Further coverage can and will be found here:
http://corruptioncripples.blogspot.com/p/occupy-occupydc.html
Stay tuned for coverage!

Please pray for the child, this family, those of OccupyDC who immediately sought to take his property for their own and for those who took part in damage to what may have been his only house and possessions.
Such actions possibly show that human may not be above the animal kingdom. Right?
Fellow humans, we can and must do better. We must!

Question even what the main stream media brings your way. Question!
For now here are some stills:

Go here to follow a new series of information referred to as "... of Interest" which is being shared:
http://corruptioncripples.blogspot.com/p/person-of-interest.html 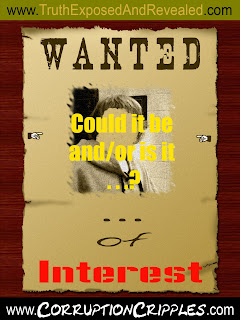 What about businesses, non-profits, organizations, sports related associations and/or be it ministers, law officers of all sorts, business people, politicians, bankers, doctors, nasty encounters, raging drivers, clerks, technicians, workers, those about the streets, male & female, young and old ... where the phrase "... of interest" may or does fit?
You are being “bagged' and tagged” by so many organizations and/or people these days. Often, more times than not, the organizations and/or people doing the bagging and tagging are not righteous and/or DO over step their bounds, as well as, use evil to have their way.
So come to know, thus becoming AWARE and stay ALERT!

Does this express it all?


There has yet been any sort of true, real life implementation of what is expressed by the OccupyDCer's except to keep those about who will give the appearance of OccupyDC for them to continue to get profit/gain/control.
Is OccupyDC really for ALL of the 99%, or for those using the 99%?
No comments: