Concepcion Piciotto's unrighteousness and willingness to be with evil!

This lawyer likes to utilize starring without blinking to bring out some sort of unrighteous response. Remember those in grade school who also did as such, and how they would also take part in evil?
Why did he do such wrong behavior today?

Smoke and mirrors were once again in full show at a District of Columbia court today – 16.02.12. Concepcion Picciotto along with support from those who seem to use tactics of corruption as if it were water to them. Steve Shapiro who was SUPPOSED to be an unbiased mediator clearly was for one side – it was not for TRUTH! His bully tactics should shock those of you who do not seek to remain servants to evil.

Concepcion Picciotto who professes to be a “peace activist” DOES lie, deceive, steal, use malice, evil and more. What else will she take part in? There have been rumors of malice, wrong doing and intentional harm being taken out on and/or with setting up our investigative interactive observer. What else will these so called “ peace (piece) activist” do which involves their support of evil? Rape, child molestation or even murder? Are they capable of doing such and accusing another? Would they plant incriminating evidence on another? There is talk that the aforementioned sort of evil/wrong action is going to take place and/or the implementation thereof has commenced. Is one such supporter of evil a D.C. man – Jackie Lawson – who showed up at a Caribou Coffee business located at 15th & M streets in D.C. with speaking of being forced to register till 2012 as a sexual offender. He also spoke of marrying a foreign woman for profit/gain/control. Is he being truthful or …? He has already shown to take part in evils, and what part has he taken with bringing harm to our IIO. His use of evil will be exposed and revealed!
Remember, his harm with taking part in evil.

The list of person(s) who are and may be taking part in evil will be posted here and on this sire being developed:  http://OfInterest.net.

Details of today’s events with Concepcion Picciotto and her involvement with evil will be forth coming.
Do not be fooled by these serving their own selfish agendas.

Do not give willingly to these "?" who use painted smilingly faces, one love, peace, we are one, the 99% and more. Ask to have their date proven. That is what they are doing to others. Do not be their fool! Not all of those professing to be peaceful are as them, and that may be only one reason why all of those who seek to be righteous unto our Creator do not involve themselves with these who are of smoke and mirrors.

There are those with OccupyDC and Occupy2011 who are not forthcoming with their involvement with the evil being forced upon our IIO.
Do you really think they can be trusted, and/or should you trust them with something so important as the future?

More will be written on this in-time, so check back!

OccupyDC protesters threaten if you will not comply!

Today, the 3rd of February 2012, more truth came out. Rich Kaufman approached our investigative interactive observer and would not leave him alone. This was even he was once again informed that his advances were unwanted. He tried once again his many tactics, but this time a new one. He tried his diagnosing our reporter as being mentally diseased or something like that. But wait, he does not have a medical degree, but as he states is bi-polar and taking medication for it. If you run into the two men in the pics below, understand that they have done wrong acts against another and propaganda for their own profit/gain/control. Raymond Voide - a self professing artist - has been making a load of money while squatting in McPherson Square. Do you think he is reporting any of it? Do you think he is taking into consideration all the the street vendors within eye site of his business activities and how much they have to pay for legal rights to set up their business activities?

Now, the man from Texas, Rich Kaufman - spelling may be incorrect -  does exhibit tendencies to be with malice and confrontational to those who only seek to avoid him.
Is it ego? Or?

It came to our attention that his wife works for Raytheon in Texas. He informed a small group of people of this before her arrival for the Occupy Congress event. WOW!, that seems odd that a person who works for a company that is involved in our nations security would take par tin such. What do you all think?
During the recent Occupy Congress, she flew to take part in it for about 2 days. She mainly stayed hidden, but was seen at times with most of her face covered.
Look at the last pic to see one of his propaganda signs wanting to do away with the military complex, but he live comfortably with his wife working for the same military complex. LOL Is this guy sane and/or safe to be around children with?

Both of these men have and/or bring on evil to serve their own. They seem to lack righteousness and with being forthcoming of good character, so use caution. More in coming time!

Both have made threats to our investigative interactive observer. Wondering if they would be willing to take a polygraph test if they are ever asked about their part in evil, or just hope no one exposes and/or reveals their deceit and/or disinformation. They like to use mental tactics/games to confuse!
Be AWARE and stay ALERT!

Take a look at the following pics of some of your representatives: 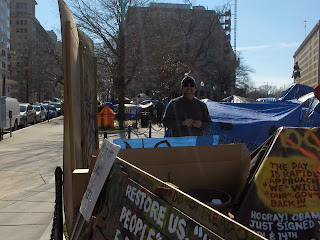 Today upon returning to the camp where sleeping DOES take place, Raymond Voide and Rich Kaufman from the Texas region, would not leave another alone who does not want to get dirty with the movement called OccupyDC. Rich kept following a man around even as he tried to eat. To get away from him, the only refuge was to go into the tent and zip it up. Raymond Voide further said that the tent would be removed if it went an attended. See, those about this so called "peace movement" take upon themselves to be judge, jury and executioner. This has been going on in McPherson Square since it set up camp/sleep some time past. A man who has been residing in the same tent as Mr. Voide, said " I have your back" to those who were bringing and seek to bring evil upon a man who is not allowed to deviate from their so called message of "peace". Please, OH please people do a lot of research on these people and ask yourself if you are better off following people who trade honesty for a kind of control that in the end will only take you into the abyss!

More on this story in the AM since both men are not without trickery and evil to get their way into your minds, pockets and lives.

When these so called "piece seekers" use evil, then are not they actually evil?

Rich, tried all sorts of dialogs and even mental abuse to get a reaction, yet none were given. He was asked repeatedly to leave the person alone, yet refused.